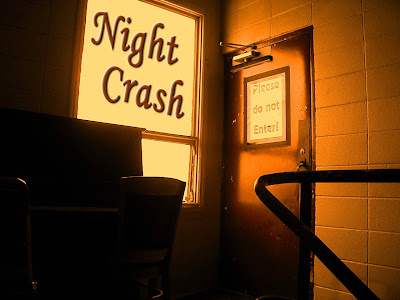 Sean had to be cut from his seat belt. These can get jammed in a collision, but you should always wear one. It might be useful to have a seatbelt cutter in your vehicle in case this happens, especially if your vehicle is on fire and you would like to get out.

The Jeep that hung upside down on a fig tree was not on fire. Sean hung there, bleeding from his chest. The steering wheel had crumpled his rib cage, you see. Air bags had not been invented back then.

One of the guys that had come running to help us whipped out a butterfly knife from his boot and opened it up.

We needed to hold Sean up while we extracted him.

Knife Guy sawed through the seatbelt from the inside out and Sean fell upon the rest of us. We tried to hold him, but this did not work. It was like trying to push up against a balloon full of wet cement. Instead, we simply softened his blow from hitting the dirt.

These guys groaned from beneath Sean, and struggled to get from underneath him.

I had simply stepped away.

I stood over them and yelled, “You trying to kill him? Get him back to the house!”

I scratched an itch on the top of my head and found a clump of mud. My face got wet. One of the guys shined a flashlight in my eyes and I pushed him away.

“What the fuck you doing?”

He shined it back into my eyes. “You’re bleeding bad!”

The desert dust had caked on my head wound and formed an earthen scab, which I’d just dug off.

I was now a blood brother to the San Joaquin River Valley Desert.
The world began to slip away.

A bee stung my head, and then another one. What the fuck? I opened my eyes and saw bright blue sky.

I felt another bee sting on the top of my head and wrenched the blue paper away from my face.

Then an orderly pushed my arms against the gurney. “Mr. Man, hold on. He’s almost finished stitching you up.”

I met Minacca in the hallway, outside Sean’s room. She hugged me.

“What the hell did you guys do?” she said.

Sean lied in his bed under a white cotton blanket. A tube snaked from underneath and coursed down under the bed. The whole room was white, except for two things.

A bag of blood that hung from an I.V. stand with its own red tube, connected to a catheter in his arm, and the other tube that went below the bed.

I pulled the cover back and saw that the other tube went into a large glass bottle that might have held cranberry juice at one time. Back then, glass was popular, you see.

The line was full of blood that seeped down into this large glass container, which was half-full.

It was not a very optimistic site to behold.

Sean had a sucking chest wound, and he had a drain-shunt in his collapsed lung. He was heading for surgery, but they wanted to know if I had any last words for him in case something bad happened.

Something bad was happening at Tellesco’s home at that moment.

Sean’s folks were on the way. This would not be a pretty sight.

Sean opened his eyes, but he had a huge tube down his throat and he could not talk.

“Sean, what the hell were you trying to do to us?”

I went to find Bryan. The night nurse showed me Bryan’s room. He was all bandaged up. His eyes looked in two different directions. He was waiting for his jaw to be wired up shut. I wonder if they brush your teefs for you before they do this? It would be gross to have the last meal or candy you ate on your tongue for three weeks.

That is why I always brush my own teefs when I am going up into the mountains for air quality sample collection during the winter. Since I drive at high speeds, and always come close to skidding off the road and crashing, I want to make sure that when I am in traction, I will have fresh breath.

The night nurse said, “Would you like to visit your friend Tellesco?”

I nodded. What the hell, why not.

Tellesco was crying. I went to his side and asked him why he was crying.

“Didn’t they give you any pain meds?”

Tellesco looked up at me with his red-rimmed, tearful eyes and hiccupped. “I got Sean hurt. It’s all my fault. Boo Hoo!”

Jeebus. I left him alone with his guilt and went to look for a vending machine.

I wondered what was happening meanwhile back at the ranch.