The Fuckno Wars CH 16 Write Your Name On My

A horror story not for the faint of heart.

We now look at the origin of the Devil of Fuckno. 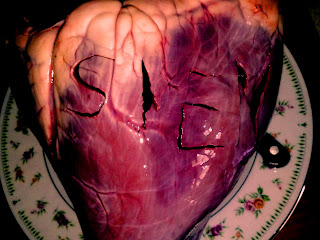 Sven Slindlivrenn hummed as he worked.  He wanted to perfect his art.  He created masterpieces with his bare hands.  His palette was human pain, and he painted in one color.  His canvas was human skin, and his brush stroke sliced through tendons and fascia, the tough sheath covering each muscle.

One hour before this:

Sven asked the tiny old woman if she was the person from Obervarten Staargarten 132 who needed a plumber this late in the evening.

She shook her head through the small window in the door, holding away the tiny lace curtain that could have been a corner-table doily in another life.  She peered up into his face through the glass.  Outside, in the falling snow, there stood a tall man; wiry and taut; almost handsome.

She looked down at the large, red toolbox in his left hand and saw that he leaned away from its heft.  It must be heavy, she thought, it must be filled with metal tools.

He asked her if she could tell him the way to the correct house, for certainly those folks needed his assistance, at such a late hour?  His voice was muffled beyond the heavy oak door.

She could help him.

She opened her door to him.

I Am A Passenger  by Iggy Pop

Sven pulled the back skin across one end of the large picture frame that he’d taken from its place over the long forgotten, dusty dining room table.  This table now served another purpose.  There was no butcher’s drop cloth beneath it to catch the drippings.

Inside out, with globules and streaks of subdermal fat strewn across the sheet, he would have to do some scraping.  Usually, when you tan a hide, you use the brains of the animal to cure the skin.  You mix it with salt and you smear it on the skin after you have scraped the fat and the veins off.

But at that moment, there was not enough time.

To tan a hide will take some time.

In the late evening until early morn, the work Sven did might have continued for another three days, until after the snow storm had passed.  Her old, frail body would not be discovered until perhaps a few more days after that.  He simply did not know this, and there was no reason for him to risk such a thing as to enjoy himself for three full days.

One night’s torture and then some rape and some eating would have to be enough.

He needed to work in the heat.  Fat is most easily removed from skin when it is in the sunlight, on a warm day.  For him, crafting his art, he could only turn up the heat in the little house, in the middle of winter, in a mountainous country where heating fuel was quite expensive, and the warmth of a spring day lied ahead in four months.

He would need to escape to a warmer clime for his work.  And also, to escape being caught.

Sven cracked open a tiny vial of smelling salts and swung it back and forth under the nose of his victim.  She didn't know that she was a victim, yet.  She swung her head away from it and her eye opened.

The side of her face hurt, and she could see from only one eye.  The other one was swelling up.  Her jaw did not close properly.  It was broken, but she could not feel the pain yet. She was in a state of shock.  She tried to reach for her jaw with her hands, but they could not move.  They were tied at the wrists, behind her chair.

She looked up with her one good eye at the blurry man before her, and he came closer, into view.  He set her eyeglasses back upon her noggin, and she could see him a bit better.  The lens over her good eye was not broken.

The other lens was broken down the middle, but her swollen eye could not see that.

Sven leaned in and said, “What is your name?”

He said, “I am Sven Slindlivrenn.  I'm not sorry, but your pain will not end all too soon.”

Sven stood back up and he laughed.  He said, “I am going to help you out.”  He held up his tin snips and he used them to cut away the front of her night gown.  He was a very bad person, and he was going to take his time with her.

He set the tin snips down on the dining room table, next to the red tool box.

He picked up the blow torch and the sparker.

He would take his time.

It was time to cook.


The he would have her dessert.

Then he would paint.

Then he would look for her valuables, and he would discover that her hoard would be quite enough to fund his travel to another country.


After he was satiated...

Sven placed the framed skin canvas down next to the body of the frail old woman on the dining room table.

He dipped the tip of his penis into the pool of blood inside her opened heart.

He began to paint.

That is the what became of the City of Fuckno.

Sven had created a minion.

Posted by TDCwillies at 1:11 AM