Youth Without Youth, by Metric.

Could you blame anyone for falling in love with Katheena?

No, you should not, and here’s why.

Seen sat down at the table, across from the old man he now owned, and he encountered something he had never felt before.

Somehow, this human vessel he adorned connected to him like nerve tissues to skin.


It was the power of the ghost girl who whispered in his ear.  She drove him mad.

He did not know where she was, who she was, and what power she held, but you and I know that she indeed held a certain power over the rest of we mere mortal men.

How odd that she could hold such power over an entity that did not exist anywhere in space and time?


A Walkin is eternal.

How odd that this Walkin would feel anything at all?

A Walkin exists for their own reason, their own agenda, and they work through their visits to our mortal plane of existence for their own gain, whatever that may be.

That will be discovered for you, if you care to follow along this old tale.

Never before had a Walkin felt anything at all.

Seen sat down and he succumbed.  He held the teacup of toes before him, near the cold, green bottle of earthly nectar, and he put his head down upon his meaty fists.

The soft sibilance sissed in both of his ears, and it sounded like she was in his soul.

She said, “ I am the answer to your purgatory.”

Seen’s shoulders slumped.  This was no answer at all, for him.

He felt something else that he’d never felt before.

He said, “What does that mean?”

She whispered again, and it was not in his mind.  It came from behind him, and he felt the willies.

He felt anger, and in feeling all of these emotions, he realized that he was vulnerable.

He jumped up and grabbed the bottle in front of him and he fortified himself with green bottle strength, and he guzzled that bottle to the last drop.  He swung it at the wall behind the old man, and it went into the hole he'd busted open with the first one.

He grabbed the black duffel bag and chucked it onto the table, which caused everything upon it to turn over and scatter and fall to the floor.

He rummaged through the bag until he found a large knife in its sheath, and he pulled it out.

He walked to the other side of the table, and he knelt behind the old man whose arms were tied behind the chair.

He inserted the knife into one wrist and pulled the sharp blade around between the bones to release the hand from the arm.

The old man awoke in pain and began to scream.

Seen grabbed the old man’s jaw to close his screaming mouth and he twisted the old neck so hard that those old neck bones crunched and crackled, and then the head fell upon the scant birdcage of ribs, and a slow whisper of breath escaped like a death rattle.

Seen did not stop there.

He removed the old man’s remaining hand in the same manner and placed it upon the table, next to the first one.  Both of them curled up into fists.  Nerves, like a killed spider.

He kicked the black duffel bag off the table and went to the refrigerator to grab another frosty cold beverage.

He popped it open, guzzled half of the contents, and sat back down at the small, wooden table.

Properly buzzing from a nectar of this earthly plane, he proceeded to skin each hand, starting from the wrist, and over the top of each hand.

With some sort of skill that one must never learn or ever know, he peeled the skin from each hand with one grip on the wrist bones and the other on the skin.

He pulled them off the meat and bones, and they were inside out.

He sliced off the connective tissues and nerve endings, cut away the fingernail beds, and scraped away the blood vessels and sub-dermal fat.

And then he did something odd.

He shoved them inside out and held them each, one at a time, up to his mouth.

He inhaled a great breath.

And then he clamped these gloves against his face and he blew hard.

His breath whistled out from where the holes of the finger nails had been as these gloves expanded.

He then proceeded to slip his new gloves on over his huge meaty hands.

They fit well, although quite tight.  They were supple.

He put his gloved hands up onto his face and he breathed in hard.   He smelled their power.

It was the smell of death.

It was not something that neither you nor I should ever know. 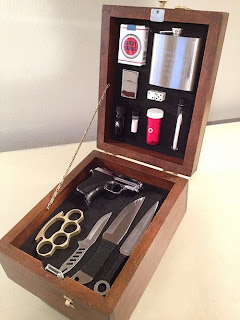 If Seen had enough time, he would have created his own black duffel bag,
out of wood. This excellent image is from Ron Ulicny


Seen stood up and grabbed the green bottle.  His gloves did not slip.  He polished off the rest of the bottle and threw it into the hole beyond the dead mass murderer.


He needed to collect some tools for his departure and escape.

Seen collected the tools he'd used and he rinsed them off in the sink.  Such a marvelous creation: instant water from an unseen well through a shiny stick.  He'd seen Sven use it to flush out his eyes from the poison powder.

He would have to learn what each scent meant, and what each powder could do.  Human experiments awaited him.

He rummaged through the rest of the shitty apartment, in closets and shelves, but there was not much else to discover.

Evidently, Sven kept a tidy place, and so, he had not scattered his tools without care.


Little brown bottles in the kitchen cupboards, a black duffel bag of excellent shiny sharp things, and a cold box full of green bottles of beer.

Seen had grown quite fond of this Earthly elixir in a short period of time.


Next, he went through the old man's pockets, and he found a wallet with an odd collection of green paper and other things inside.

He knew that a man will keep his most important things close to him, so he did the same with this small leather folder.


Then he found the ring of tiny metal tools that Sven had pulled from the hole of the horse-less carriage and caused that thing to become quiet.  He'd used another of these tiny tools to open the door to this marvelous place.


Seen held them in his new gloves, and turned them over under the light bulb that dangled from the ceiling over the small kitchen table.


They glinted like minuscule swords fresh from the fiery forge of Hephaestus.


They were the magic of these industrious Humans.  He would never let them go, and would seek more.

He ignored the warmth in his cockles, and he looked about the place.


What was he missing?


He paused, for it could mean the end of his time here, in this mortal coil.


It nudged him from the back of his mind.

And then he saw it.  It was the odd metal weapon that he'd used to smack the old man in the head.

It fit nicely in the hand and it was heavy, but why was there a hole at the tip of the extension?


Was there something else about this weapon that he did not know?


This would also take some experimenting, but not now.

Now, he knew that he had to escape.

He found the demitasse, and it had been broken upon the floor.  He collected four tiny toes, and that was all.


He searched for the fifth one, but could not find it.


For whatever that Walkin's agenda might be, he could not fulfill it without a fifth digit.


He sighed and went about collecting another one from the old man's feet.


The gloves he wore left the old man's fingerprints on his bloody feet, and on every other surface he touched as he went out the door.

The ghost girl followed him to the horse-less carriage.

You should know that Walkins are very observant.  He had seen how Sven had pushed the stick into another position, into "D."


However, he had not noticed the two foot-petals: one for Go, and one for Stop.

He would have to learn quite a lot in a very short amount of time.

Although Walkins are eternal and their visits here are never for all that long, they understand that everything means something.

Perhaps that is a wise thing to remember, my friend.