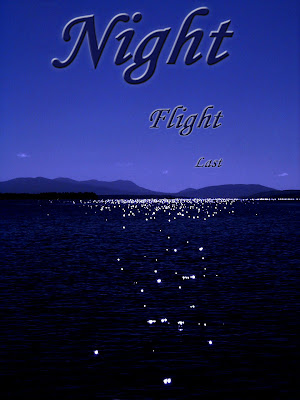 Joey’s eyes were on the tiny tea cup in front of him. He would not look up at anyone while the following discussion occurred.

Katheena took off her kimono and sat across from me. Joey was on my right. The fourth seat was empty. There was nothing there.

I tried to break the mood. “Aces high, black hearts are spades.”


“Lorelei and I talked some, you know.”

“I know. She told me. What did you talk about?”


“She told me that she hated him for how he left her. But she kind of knew it would happen. She just didn’t think it would happen over here in the desert, instead of back home in Germany.”


Katheena sipped her tea. “He was pretty amazing, but I know you don’t---”

“No. I don’t need to hear that shit at all Katheena.”


“Sit down Will. Please, sit down. I won’t say anymore like that.”

“Weeee-ill. Sit down for a couple minutes. Come on man.”


Ya know, I figured it would be pretty hard to hear this shit. I was simply hoping that it would be about Lorelei, like some answers or something. Fuck Ivan. He should have been at the bottom of the sea, not Lorelei.

I should never have let her slip my grasp.


“I know you are. Stop saying it and spit your truth out Katheena.”

Joey put his teacup next to the service and Katheena was thankful to have something to do with her hands as she composed herself and got ready to spit some truth. She poured tea into his cup, and some more into mine.


She was about to show some of the mettle that she wasn’t quite aware she had held all along. This, for her, would become quite important in a later chapter. You will see.


She sipped her own tea and composed herself.


“Lorelei said that she forgave me. She saw that I had nothing to do with her betrayal, her Betrayer. Even though it hurt her, and continued to burn, she was thankful in a way. She was thankful for two reasons.”


What the fuck was this shit? Asshole Ivan had burned her, and she was thankful?


“Lorelei was thankful that it was finally over. The old phrase, waiting for the other shoe to drop. She said it’s like when you are sleeping in your bed, and the person in the apartment above you wakes you up when they are taking their shoes off. One shoe drops loud on the floor over your face. And you can’t go back to sleep until the other shoe hits the floor. The time in between is long. When it finally does, you have closure.”


I didn’t have a clue what the hell she was talking about. Katheena saw my face and went on.


“She knew he was going to leave her. As painful as it was, at least she could start to recover. And that brings us to the second reason. You.”


“She said that she wanted revenge on him, and also on me, when it happened. So she went about, asking about me. And she found out about you, and what happened to you because of it all. Someone told her that you and Joey are good friends---“

“Weeee-ill. When she came up to me, she was all asking about you like she was all wanting to get in your pants. So I told her where you had classes, Weeee-ill. I thought you might get something to help you out of your Well of Despair, or whatever those faggy Britland dudes used to write about.”

“Joe, she came up to me in the hallway, and I had no idea what the hell was going on.”

“I know, because she came up after she first got up in your face and she thought she had pissed you off, or gone all about it wrong. Sorry to say it, but I think she was hoping you’d join up with her to fuck up Katheena and Ivan’s shit. Two broke-hearts against two lover-dovers. Sorry Katheena.”

My head was starting to spin. “Yeah, I know, she told me later. But she was pretty cool.”


“She was, Weeee-ill. She pretty badass. Remember what she said on the Quad, when she was being led away by the Police? Dayam, son, that was---“

“Joe, hush. Let me tell Will what Lorelei said to me.”


“Will. Lorelei told me that she was glad she had met you. She said that she had finally found someone who showed her that there was good in the world.”

This was a bit too much for me. I was not ready for feeling sad. I wanted to remain pissed off at everyone, at everything. I had no words for it at the time, but that was chust how it was. Fuck Califuckno to hell.


“Yeah, Weeee-ill. We’ll go have one of them burrito supremes you like so much, after this.”


“Good, have some more tea. Thank you Will. Lorelei said that she knew she’d have to go back to Germany. She knew she might never see you again, but she would do her best to try to come back to you. She would work for cash money, do whatever, to get back to see you again.”

“You know, she was like that. She didn’t want to make you sad. She wanted you to stop being so sad. She really did. So she didn’t let on about how much you meant to her. I think it was pretty hard for her to keep it away from you. But now, it’s a shame that she never let you know, the way things turned out and all.”


“Yeah, Weeee-ill, she told me that she felt like she wanted to protect you from the bad things in the world. Like she was trying to mother you or something. That chick really dug you, man.”


“Will. She said she wished she could protect you. I think she would have went to the ends of the Earth for you.”


I didn’t need that shit.