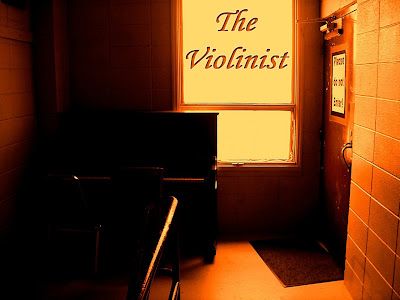 A Guardian Angel? From the fallen aircraft, into the sea. I was then and always will be a river culture dude, but lost in the desert of an ancient river valley in Califuckno at that point.


A short but mighty young man walked up to the front door of my section eight poor folks housing duplex and knocked politely. I couldn't hear him from where I was standing there in the rear patio, so he walked right in and hollered into the hallway.

"WEEEEEE-ILLLL! Get Yo Ass UP!" His shout echoed down the tiled hallway and throughout the duplex apartment, ringing in the way that mostly empty places do.


I about jumped out of my skin, and I was already awake, out on the rear patio, where there was no furniture or grill. There was nothing.

I set my mug down on the cement and crept in. I snuck up behind him and yelled, "GOOD MORNING JOSEPH, HOW ARE YOU?"


He jumped out of his skin, I kid you not.


Sometimes, payback is a bitch.


He spun around with his fists up and jabbed at my face. I did not expect this. He connected with my cheek with a loud crack. We both shouted in pain.

It was a good thing I'd left my coffee outside. Who knows where the mug would have ended up. He was laughing at being jumped, and sort of whimpering from his fist. Try to aim for the jaw or eye if you can, not the cheekbone. It's never a good idea to crack your knuckles upon fixed bone.

My cheek was hot from being smashed against the bone underneath it. It would swell up, that was certain, but I would get a black eye if I didn't take immediate action.


When you have been hit in the eye, from a knuckle sammich, or walking into a wall corner or the blunt end of an open door, you have about ten minutes of opportunity to stop from getting a black eye.

Here's what you must do:


Ice cold anything. A cold steak will help, some people use salt pork (called fatback, if you live up north), and others use a bag of ice. I'd always used a bag of frozen vegetables, until I learned to block swings at my eyes.

Bags of frozen peas are full of small pieces that will mold better around your eye socket, and they do not melt into water. Vegetable give off their cold immediately at first, but then they slow in their thermal absorption.

You will not freeze your eyeball.


If you have none of these, then a source of cold water from the tap, into your cupped hand running continuously over your affected area, will provide the needed lowered temperature to keep it from swelling up and causing blood to pool and stagnate, which turns blue then purple.

Don't press on that which has already been smacked. Be gentle with a wound.


Be very gentle, with a wound.


I went to the fridge and opened the freezer on top. Joey followed me into the kitchen.

"You gonna zap a frozen burrito? I'll have one."


He chuckled and went to the sink to grab a towel. "Got any ice in there?"

We both sat on the edge of the cement slab, feet on the tar walkways that led to the communal area of the duplexes, me with a bag of frozen peas wrapped in a towel over my cheek and eye, and he with a bag of ice in another hand towel over his knuckles.


Coffee mugs sat next to us. This was before I lived alone and learned to drink my coffee black, so that I would have enough cash for alcohol instead of sugar and creamer.

There were three tablespoons of creamer and two of sugar in each of our mugs.

The sun looked down on us with a warm smile, like an evil clown who had plans for us.


Actually, the coffee tasted pretty damn good on that fucked up day.

Katheena's house sat behind walnut trees at the end of a cul-de-sac. A 1940's Era block house, constructed with solid craftsmanship and ornate, white trim, and forest green-painted stucco. I'd made some good memories inside her,


We sat around the kitchen table and she performed a tea ceremony, something her mom, back in Thailand, had shown her. The tea ceremony hails from Japan, but her mother was knowledgeable about many fine things of the many Eastern People.


The East is always a good place to go, you know.

"Joey, I wish you guys wouldn't call him that. Why do you do that?"

She looked at me, hand on her hip.

I smirked, shaking my head. "It's dumb. It's nothing. Ok, Ok, I'll tell you. Stop pinching my cheek! It hurts. Umm, well, it's from the Rocky Movie. Ya know, Ivan Drago, the giant Russian boxer."


Katheena laughed, and she'd always had a lovely laugh. No my friend, I was not falling for her again. That was no man's land for me, chummy.


She said, "I can see that! It's funny. Ok, I just thought it was derogatory or something."

Katheena's smile faded, and she quietly cleared her throat and swallowed. The air in the kitchen grew a little thin. But the atmosphere was suddenly quite dense.


Each of we three had been involved in the repercussions of what had followed after the introduction of Ivan into our tight friendship.

And the appearance of Lorelei.


"Will, I just want to apologize for what I did to you."

I sipped my tea. "No worries. Shit happened. 'Nuff said."

"Look, it's all water over the wings. What's done is done. I just want to be done with it."


"I know, nothing can be changed. But maybe I can help make some sense of things. There are some things that you should know."


I have always said that nothing good comes from hearing the words, "I think you should know."

But this here one time, my friend, I would be wrong about that.

You will see tomorrow, on Sunday.

Kain Carter, home made comedian. Funny as hell. 71 videos, if you like his stuff.

Wave at the bus. 170 days of your dear old dad waving you off to school dressed as in a different costume each day. His son will need therapy.


Those two folks above believe in what themselves. You ever had a dream…?

This guy followed his dream, of being a tow truck operator. He is dedicated to his trade.

My Name Is Two-Ten from Michael Nusbaum on Vimeo.

Some started out that way, but then got jaded. Or, is it traded? Here is the explanation of why the second trilogy of the Star Wars series was, well, …what the fuck happened to George Lucas anyway? From Slick Gigolo, 20 videos if you like this stuff.

For instance, here’s the latest Star Wars spin off by George Lucas, by way of the Jersey Shore. Jedi Douchbags. WTF?

Back to reality, or realty, as it were. Bank of America tries to foreclose on a couple who’d bought their house with cash money straight up.


It’s all about truth, my friend. And dispelling misconceptions.

In another direction, the Drunk Kitchen. Seven videos, if you like to drink and cook, which is dangerous. But funny.

Tom Cruise is weird? When Kirsten Dunst was a kid, her folks tried to prep her for an interview after her first movie. Kid spilled her own truths. Huh. What do you think of her parents?